What does the Future Hold for Open Concept Design? 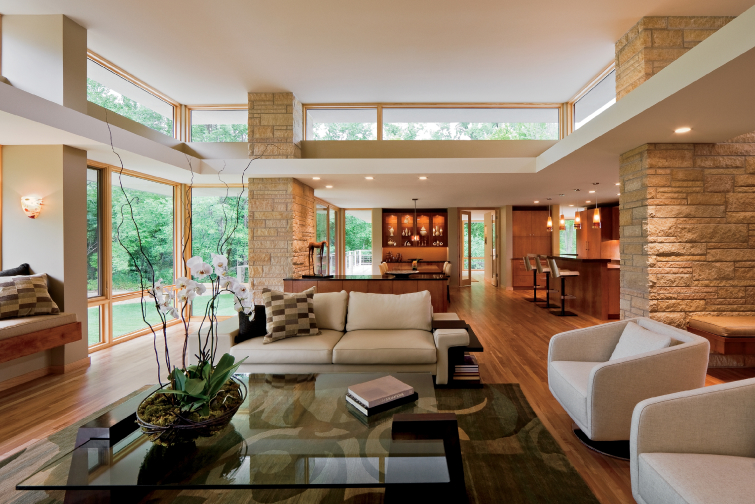 There’s a lot of discussion about the rise (and potential fall) of open floor plans.  From kitchens to family rooms and beyond, this approach to architecture has both its rabid fans and vocal detractors.  What’s at stake is the very future of home construction and design, given the sheer number of homes that feature these types of floor plans.  So before we make any predictions, let’s dig in a bit on the subject to make an informed decision! 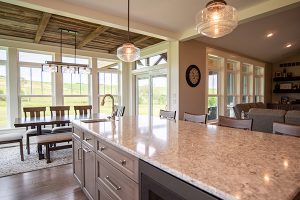 Connecting separate living spaces certainly has its benefits.  For one, it can make a smaller home actually feel larger.  Plus, with open sightlines, our activities from room to room are uninterrupted, including our interaction with anyone else who might be home.

Even within the footprint of individual rooms, the open-concept approach can make a huge difference in how we experience the space.  Take open kitchens for example.  The ability to freely flow from one workspace to the next is a major requirement for today’s homeowners, whether buying a new home or renovating their current one.  Ultimately, it means you have the ability to apply an open-concept approach within your respective rooms while also preserving a certain amount of seclusion with other rooms throughout the house.

If you have an open floor plan, you may also be a fan of minimalism.  Often described as “contemporary” or “modern”, these spaces were originally inspired by the mid-century modern movement of the late twentieth century.  It truly came into its own with the architecture of Frank Lloyd Wright and the echoes of Wright’s original concepts can be felt in homes all over to this day.  For more detail on this topic and its characteristics, check out a former post in our blog archive here.

Speaking of character, let’s not forget the desire we might have to personalize our living space according to our own style.  With an open floor plan, you have the ability to create your own boundaries and definition between separate living spaces by using things like artwork, floor coverings, or your furniture as accent pieces. 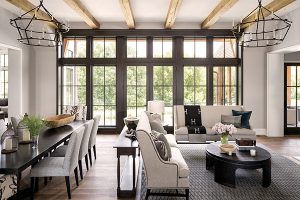 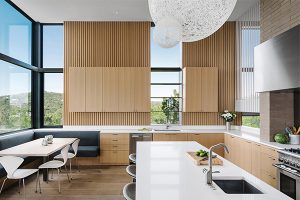 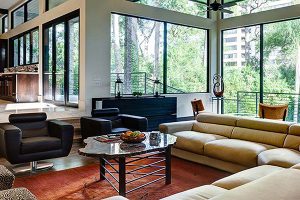 The Role Windows Play in the Open-Concept Approach 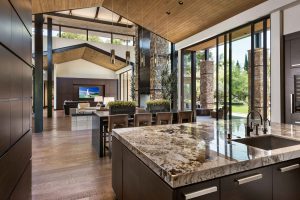 Natural light can truly unlock the potential of an open floor plan.  What do we mean?  Earlier we talked about how open floor plans can benefit smaller homes.  In traditional terms, we often describe homes and rooms in terms of square footage.  However, when you think about it, we actually experience our homes in terms of volume or volumetric space, meaning the entirety of the space in a room – from the floor to the ceiling and from wall to wall.  Windows that allow natural light to enter our homes contribute to our volumetric space from a visual standpoint since there’s no barrier blocking our view.

Creating that seamless effect between inside and out, windows that feature sleek, streamlined profiles like the windows we feature are a great option to consider, whether you’re building a new home or remodeling an existing structure.

From a design perspective, these windows also serve to enhance the overall setting.  And getting back to that personalization we mentioned earlier – at Davis, our Paint Shop has proven helpful on numerous projects where color matching was a key component to making sure the windows fit the motif and gave off the desired effect.

Our ultimate goal is to deliver product solutions that you’re going to feel good about on multiple levels.

So what’s the verdict?

Despite the chatter to put those walls back up in our homes, there are still a lot of great reasons as to why open concept spaces are viable and here to stay.  If we were to ask the Magic 8-Ball, it just might say  “ask again later.”